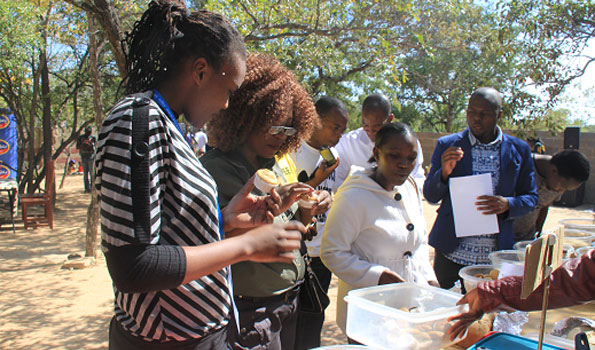 At the expo, ICRISAT showcased baked products such as bread, muffins and biscuits made of sorghum and millet and also crop varieties that are suitable for drought prone areas such as Matobo District. Recipes were handed out to visitors to encourage them to try these at home.

Mr Pathisa Nyathi, Founding Director and owner, Amagugu International Heritage Centre (AIHC), welcoming guests to the expo, said, “The expo promotes traditional food that are highly nutritious and recommended for a healthy diet. The event is being held at an ideal time, as it is the end of the cropping season, and this presents an opportunity to explore various types of dishes that could be derived from the available cereals and legumes.”

Mr Nyathi thanked all exhibitors for coming to the expo including the local farmers, appreciating that in a time when the nation was experiencing a drought, the local farmers had come out with some produce to present at the expo. He hoped that this expo, the first of its kind at AIHC, would become a permanent feature.

The expo held on 14 May, was hosted by AIHC, a community oriented cultural centre located in Matobo District of Zimbabwe. It was attended by local farmers, faculty from the Great Zimbabwe University and National University of Science and Technology, AIHC board members, journalists, school children and teachers from King George VI School.