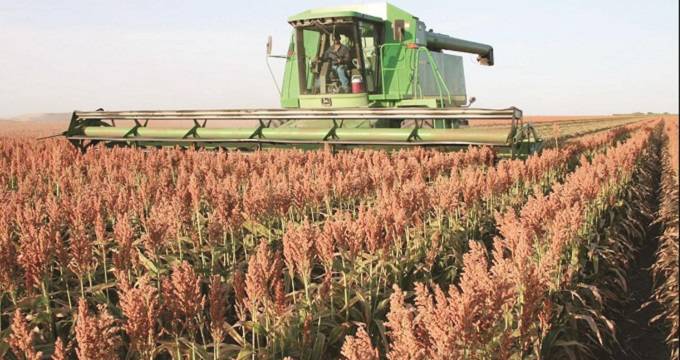 SORGhUM has a lot going for it. It’s climate-smart, highly nutritious and we already know how to grow it.

If we put the right amount of money and thought behind it, it could also help solve our unemployment woes.

The end of 2017 was characterised by a series of extraordinary events.

One that will stand out for longer than the other, more immediately dramatic ones, was the emergence of agriculture as a driver of growth.

After years of being written off as the economy’s stepchild agriculture, forestry and fisheries helped propel the country to a higher than forecasted gross domestic product growth in the final quarter of 2017.

The agricultural sector posted a 37.5 percent growth over the quarter (17.7 percent over the year), underpinning the economy’s 1.3 percent growth for 2017. This might be a trend.

As world populations grow, we are hearing more about the potential value of Africa’s huge reserves of arable land—estimated to account for about 60 percent of the global total.

In a world rapidly running out of farming land, the argument goes, Africa could build its economies on supplying a chunk of the world’s food.

This unutilised treasure chest is the true target of China’s seeming huge appetite for African investments, some say. The truth, though, is that our agricultural potential is as yet unrealised.

We still have the lowest cereal yields in the world, and we imported basic grains worth $30 billion in 2011, according to the Food and Agriculture Organisation of the United Nations.

In short, we need to feed ourselves first—but when we do, we have a great opportunity to feed the rest of the world.

The question is how to kick start Africa’s green revolution — or, one might say, create a genuine Africulture, attracting foreign investment, earning hard currencies and, critically, providing jobs?

Sorghum, a grain that is native to Africa, surely has a major role to play.

Although much of Africa’s commercial grain production is given over to the cereals desired by the rest of the world, such as corn, sorghum remains a staple of the rural economy.

That’s already one big point in its favour. We have a skills base in this area backed up by generations of farming knowledge.

We talk a lot about using indigenous knowledge systems — well, here is one ready and waiting to contribute to Africa’s regeneration!

Another important point about sorghum is that as it spread out from its original range in north-east Africa, genetic mutation and patient selection by generations of farmers produced regional varietals best suited to local climatic conditions.

In other words, without the intervention of people in white lab coats, we have a richly stocked seed bank that will allow us to exploit the potential of this uniquely African grain.

In today’s modern, rapidly urbanising Africa, sorghum is too often seen as the basis for traditional beverages (alcoholic and non-alcoholic), and for porridges we associate with a traditional style of life.

But that is only half the picture; like other traditional foodstuffs from around the world, sorghum can be used to create new products that appeal to modern palates and lifestyles — quick to cook, healthy and affordable.

Think, for example, of the way in which the South American staple, quinoa, has been successfully recast as something between a superfood and a gourmet treat.

The good news is that there are signs that a perfect storm is brewing, one that will propel sorghum to its rightful place as a prime component of a new era in African agriculture or afri-culture.

He highlighted its tolerance for both heat and drought, conditions that are likely to become more prevalent as climate change unfolds.

However, he stressed the need for Africa to invest in sorghum across the whole value chain. Specifically, he said, we need to provide incentives to attract young Africans into the sector.

She said we should be designing sorghum-based foods for specific purposes — for example for athletes or diabetics — as well as general food products adapted to modern tastes.

A biscuit product is expected to be launched soon.

Educating consumers and policy-makers will be a critical task in building these new markets for sorghum, and attracting the necessary investment.

In a small way, the Diageo Empowerment Trust is playing a part in what we hope will be a sorghum revolution.

We identified sorghum farming as a key focus for our efforts to create new black-owned businesses as part of an effort to expand our economy rather than simply transform the existing one.

One of our hallmark initiatives is to nurture black-owned businesses that can form part of our own supply chain, and sorghum farmers are an obvious choice—especially because many of them are owned by black women.

We are working with various partners to select the right farmers and then maximise their chances of success.

One important partner is Aurik Business Accelerator, which is helping us to identify individuals with the potential to build sustainable businesses; another is TechnoServe, a well-established non-profit focusing on developing entrepreneurs.

TechnoServe is helping us to identify better areas for sorghum production, providing technical assistance to the farmers selected by developing a growing programme, providing training and so on.

In the Eastern Cape, for example, they are helping the small-scale farmers to aggregate their land to provide economies of scale and facilitate distribution.

Sorghum has all the potential to provide an African solution to Africa’s challenges—a real opportunity to cash in on a legacy created by our ancestors.

The only question is whether we have the vision to invest in it. I hope we do.