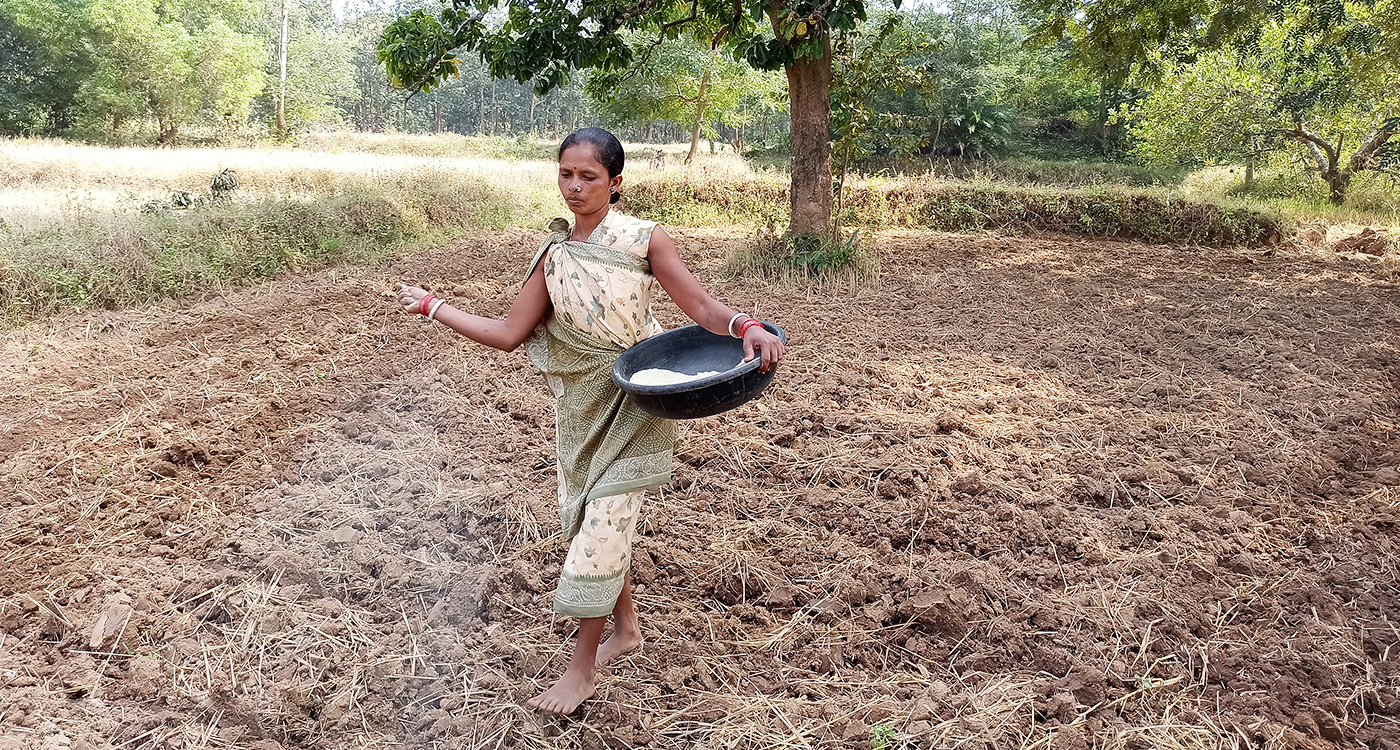 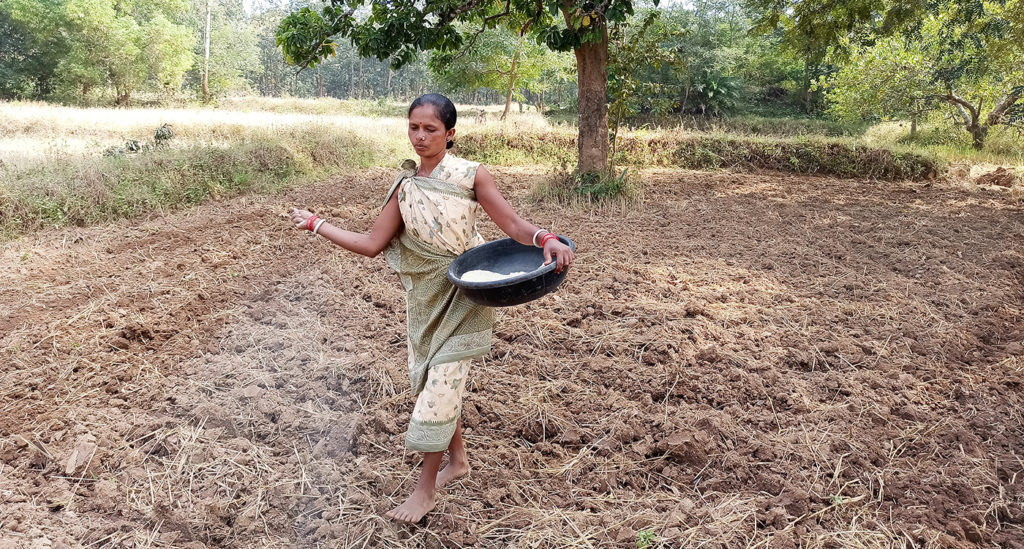 A farmer applies micronutrients to the soil in Nabarangpur district, Odisha. Photo: ICRISAT

Working closely with the Government of Odisha, ICRISAT has helped develop a mitigation strategy for agriculture for COVID-19-related challenges. It involves safeguarding harvest-ready crops, arranging for distribution of perishables and preparing for the next crop season.

COVID-19 could not have caught India at a more vulnerable moment. Starting April, Indian farms go into mission mode to be able to feed a billion plus people within and millions more outside for the rest of the year. That COVID-19 may compromise the mission warrants strategies extraordinaire.

Odisha’s response plan is to meet the virus head-on despite being spared of its wrath; it had reported just 160 positive cases and one death at the time of writing this. That, however, has not left it complacent. For, Odisha, an agrarian state that witnessed impressive growth in crop productivity and farm income in recent years while being disproportionately affected by extreme weather, disparity in farm incomes and high dependence on labor intensive crop production, has much at stake. Agriculture engages nearly two-thirds of the state’s workforce and is worth ` 75,800 crore annually.

Given the stakes, ICRISAT, which is working with Odisha Government to help farmers recover from the cyclone Fani, and boost crop productivity as well as farm incomes by improving the state’s soils, developed a COVID-19 response strategy. The strategy is going into action in parts of Odisha and may have lessons for the rest of India.

As COVID-19 reduced workforce availability and mandates physical distancing to lower risk of spread, machines had to be efficiently pressed into service. With efficient deployment of machines and where available, human workforce, harvesting of Rabi crop has been near complete.

After harvesting and primary processing at the farm gate, procurement of the produce is to begin with the state’s efforts, mainly in transportation to secondary processing units. It was suggested that railway wagons be converted into mobile procurement centers and run through major railway stations at district and block levels to augment road transport. It was estimated that 450 trains of 30 wagons each would be needed to procure 7.5 lakh tons of paddy from just 38 critical blocks of the 295 paddy-producing blocks.

These blocks were mapped with Odisha’s railway network to plan procurement routes. The critical blocks were further classified as high, medium and low criticality depending on their produce estimates. Further mapping revealed that these critical blocks clustered around districts like Bargarh, Subarnapur, Baleswar, Kalahandi and Koraput. Criticality was attributed to these blocks as it was estimated that they can produce a surplus of 90% over local consumption, which, if not procured on priority basis, can lead to distress sale.

If enough railway wagons can’t be arranged in time, the state could consider procuring the marketable surplus at doorsteps of farmers or call them to designated procurement centers (say, through SMS alerts) to avoid crowding. Decentralized procurement beyond mandis may require suitable amendments to the Odisha Agricultural Produce Marketing Act. Returnee migrants as well as local agricultural labourers could assist in these operations while following COVID-19 risk management guidelines.

Vitally, the Government has to permit functioning of processing units with distancing and sanitization measures, besides providing health insurance cover to those involved in the operations at this time.

Bottlenecks in supply are severely affecting producers even as consumers are distressed by having to pay more and make do with reduced availability of fruit and vegetable. Perishable commodities will have to be aggregated at the village level or by FPOs (and by large number of self-help groups, promoted under the Mission Shakti in Odisha) with a view to target local promotion of 50% of the produce.

Air-conditioned railway coaches/refrigerated transport can be used to ferry remaining produce to distant markets, besides activating local cold storage units for temporary storage. It was shown that one AC train with 14 coaches would be required to lift around 177 tonnes of vegetables and 457 tons of mango every day from Koraput, which is one of the major producers in the state. Permitting secondary food processing units can further help the produce find takers.

Like in Rabi, there is a heightened need for mechanization to complete ploughing, seed bed preparation and seeding or transplantation for Kharif. An inventory of machinery at the block level based on the requirement was suggested. Estimates were drawn up for Cuttack to show that 5,350 tractor equivalents for ploughing and 5,618 for puddling were required for a total of 2.2 lakh hectares in the district. Similarly, 3,219 and 3,380 tractor equivalents for ploughing and puddling respectively would be required in Bargarh.

Estimates for requirement of high-yielding varieties of seeds of paddy, groundnut, green gram, black gram and pigeonpea were also provided for Bargarh. For paddy alone, based on recommended seed rate and area sown during Kharif 2019, 14,045 tons would be required. Similar recommendations were made for paddy and chillies in Cuttack.

The two districts were also used as examples to demonstrate fertilizer requirement based on area sown during last Kharif and recommended doses for nitrogen, phosphorus, potash, boron, zinc and sulphur. ICRISAT was able to make dose recommendations as it had analyzed around 40,000 soil samples in the state over the last two years.

The COVID-19 strategy made use of cloud-based applications to draw up farm-level inventories for equipment, labor requirement, seed and fertilizer requirement aggregation as well as output aggregation with market linkages. Its success hinges on the Government ’s ability to coordinate the response bottom-up – from village to the state-level.

For a state with a record in efficient handling of natural calamities, the COVID-19 should be just another challenge to repeating its success.

Click here for the complete report on this initiative.

Read more in this article, originally published in The Pioneer.