The Pulse of the Drylands – ICRISAT 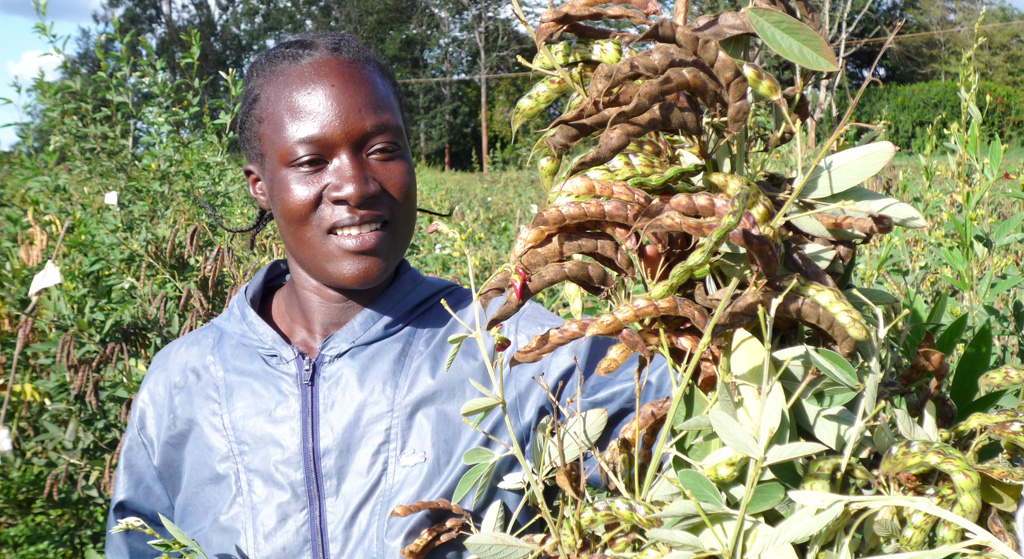 As the world adapts to climate change, crops once termed ‘orphan crops’ are now attracting attention, especially dryland pulses like pigeonpea and chickpea that have been ICRISAT’s mandate crops for more than four decades.

These climate-smart crops help the smallholder farmers in arid and semi-arid regions of the world withstand weather variability, require less water, enrich the soil and are packed with nutrition. These crops provide more nutrition per drop not only for humans and livestock but for soils as well through their nitrogen-fixing properties. Over the years, ICRISAT and its partners have selectively enhanced pulse productivity through the application of modern breeding and screening techniques to increase resilience and nutrition, and to develop modern varieties and their associated production practices.

Pulses are what we call Smart Food – good for you, good for the planet and good for the smallholder farmer. Pulses like chickpea and pigeonpea will contribute towards the new Sustainable Development Goals to reduce poverty and hunger, improve health and gender equity, promote responsible consumption and help adapt to climate change.

Why pulses are climate Survive weather fluctuations: Pulses like chickpea can withstand temperatures in desert-like regions that experience significant difference in day and night temperatures; pigeonpea crops destroyed by unseasonal rain have the potential for a second flush to produce a good harvest.

More nutrition per drop: In a country like India, pulses play an important role as they are the main source of dietary protein. The protein in one glass of pulses equals that in two glasses of milk. Chickpea has the highest protein bioavailabilty among pulses. The high dietary fiber in pulses lowers risk of diabetes, heart ailments and gastrointestinal diseases. Pulses also provide substantial amounts of micronutrients (vitamins and minerals) such as Vitamin E, Vitamin B6, folic acid, iron, potassium, magnesium, calcium, phosphorus, sulfur and zinc.

Chickpea and pigeonpea are great sources of iron, manganese and zinc and can play a key role in countering iron deficiency anemia – a serious health issue that ranges from 50-70% in women and children, with pregnant women being the most susceptible.

Diverse food basket and extra income: Pulses are ideal for on-farm diversification. As an intercrop with cereals and other crops, pulses bring in extra income for farmers and at the same time increase the yield of the main crop. In Kade, Ghana, pigeonpea in the cropping cycle resulted in over 100% increase in maize grain yield. Crop rotation not only enriches the soil for the following crop but also makes profitable use of land that might have otherwise been left fallow.

Diversified uses: Chickpea green leaves are used as a leafy vegetable that is superior to spinach and cabbage in terms of mineral content. The green immature seed is used as a snack or vegetable. Selling green grains is highly profitable as these are sold at a higher price than dry grains. The split dry seed and its flour are used in a variety of food preparations.

Pigeonpea also lends itself to various uses. The leaves and forage are high in protein and are largely used as fodder. The stalks are used for fencing, thatching and preparation of baskets. They make for excellent firewood as the calorific value of stalks is about half that of the same weight of coal. It is also used as a shade crop in cocoa and vanilla plantations in Nigeria and South Asia respectively.

ICRISAT works with partners along the whole value chain of pulses in an integrated manner to create a win-win situation for the farmer, consumer and the planet. This is in keeping with our belief that all people have a right to nutritious food and better livelihood and also in line with the Sustainable Development Goals.

ICRISAT is making tremendous progress in modernizing and leveraging tools to better utilize genetic diversity. After publishing the genome sequence of chickpea and pigeonoea in Nature Biotechnology in 2012 and 2013, respectively, we are working on completing the resequencing of 3,000 chickpea accessions to better utilize the rich genetic diversity that exists within these crops. While over hundred varieties have been released with partners using traditional breeding tools, we have embarked recently on forward breeding that involves utilization of a select set of markers to accelerate the incorporation of traits that are important for farmers to manage climate change and improve nutritional security.

ICRISAT and partners have been successful in developing cultivars that are high-yielding, drought tolerant, disease resistant, short duration (as short as 75-80 days) lines and hybrids custom-made for specific regions of the world based on the preferences of farmers and consumers.

Currently research is focused on developing climate-smart cultivars suitable for mechanical harvesting, inter-cropping with cereals and able to improve soil health. We currently use less than 2% of the existing genetic diversity in chickpea and pigeonpea. Hence, there exists tremendous potential to increase the productivity and resilience of these crops using modern tools to expand the use of natural diversity in gene banks.

On-farm practices like intercropping of cereals with pulses and crop rotation to improve soils and increase yields have been tested on farmers’ fields with positive results. Farmers are also introduced to ridge planting and broadbed furrows to better manage water and soil. In the case of pigeonpea, ratooning techniques to support zero tillage have been developed to minimize soil erosion under increased incidences of intense rainfall events.

Working along the value chain

The holistic approach of ICRISAT (see diagram) shows how we work along the whole value chain of pulses. Crosscutting issues such as empowering women and youth and mainstreaming nutrition will ensure pulses contribute significantly towards achieving the Sustainable Development Goals. A few examples to illustrate how we work

Analyzing key problems and opportunities helps create win-win situations for farmers. The expansion of chickpea growing areas by as much as 80% in the rice fallows of Prakasam district in Andhra Pradesh, has benefited smallholder farmers. Pigeonpea used as land cover to manage soil and water in China helped reverse soil erosion and land degradation and at the same time provided quality fodder for cattle.

Introducing processing and facilitating market access in Rajasthan, India, helped women generate more income. Split pigeonpea (dal) fetches a higher income and is part of the staple diet in many Asian countries. Women’s groups were provided dal mills and trained to operate the machines. The dal sold in local markets helped double their profit. The sale of husk as fodder and pigeonpea stalks as fuel helped them earn an additional US$ 308 per ha. Seeing the revenues, many young women in the village were willing to take up pigeonpea cultivation and operate dal mills.

Driving market development plays a crucial role in making agriculture profitable. To understand legume value chains in Tanzania, a pigeonpea value chain assessment survey revealed that Tanzania is now the fourth largest supplier in the world . Besides being an important cash crop for Tanzanian farmers, it is also widely consumed and thus, contributes to improving nutrition security. The incorporation of improved varieties and management practices was reported to almost quadruple revenue from pigeonpea production.

Decreasing amounts of pulses on farmers’ and consumers’ plates is a cause for concern in developing countries. In India, pulses are in short supply resulting in rising prices. Achieving self-sufficiency in pulses production is a priority of the Indian government, and ICRISAT along with partners have responded with a detailed plan for increasing pulse production to 30 million tons by 2020.

ICRISAT works together with local governments in Asia and sub-Saharan Africa, national agricultural research systems, agricultural universities, international and national donor agencies, agribusiness entrepreneurs and private agribusiness companies to empower farmers through demand-driven science and innovation.
In the countries that ICRISAT is working in, country strategies have been drawn up to optimize pulse productivity and profitability for smallholder farmers, especially the dryland tropics where the impact of weather variability is most acute. For us, demand-driven innovation is the driving force to realize the full potential of pulses to achieve nutritional security while staying within the ecological boundaries of the planet through more nutrition per drop.