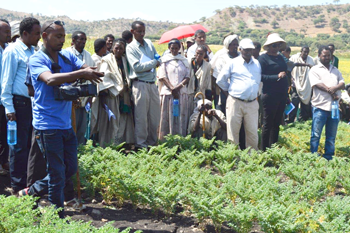 At a field day organized at East Belessa, Gondar, to create awareness on Ejere, a chickpea variety that is new to the area, farmers expressed their interest to engage in seed production in the coming season after seeing its performance. The Habru variety, introduced earlier, had increased the productivity of chickpea in East Belessa District from an average of 0.6-0.7 t per ha (for the local variety) to 2.4 t per ha.

To meet next year’s demand for seed, farmers have been grouped into two clusters, one producing Ejere and the other producing the Habru variety. The Habru variety will be grown on 10 ha while Ejere on 12.5 ha. The seeds will be certified by the Amhara Seed Laboratory.

Three years ago, the Tropical Legumes II (TL II) project started work in the new intervention districts of East and West Belessa which have an average annual rainfall of about 650 mm. Farmers’ participatory varietal selection was conducted and the Habru variety that performed well in farmers’ fields was promoted. Under the TL III project, Gondar Agricultural Research Center has been implementing innovative ways of seed security in the area by clustering together farmers producing the same variety. After inspection and certification by the Amhara Seed Laboratory, the farmers are then linked to multipurpose cooperatives who buy and then sell the seed to other farmers at affordable prices.

At the field day, farmers requested the scientists to support them to solve tef and sorghum production challenges, especially with regard to Striga. Another major challenge for researchers and policy makers included creating linkages to reliable markets because as production increases, farmers will be challenged to profitably sell their produce.