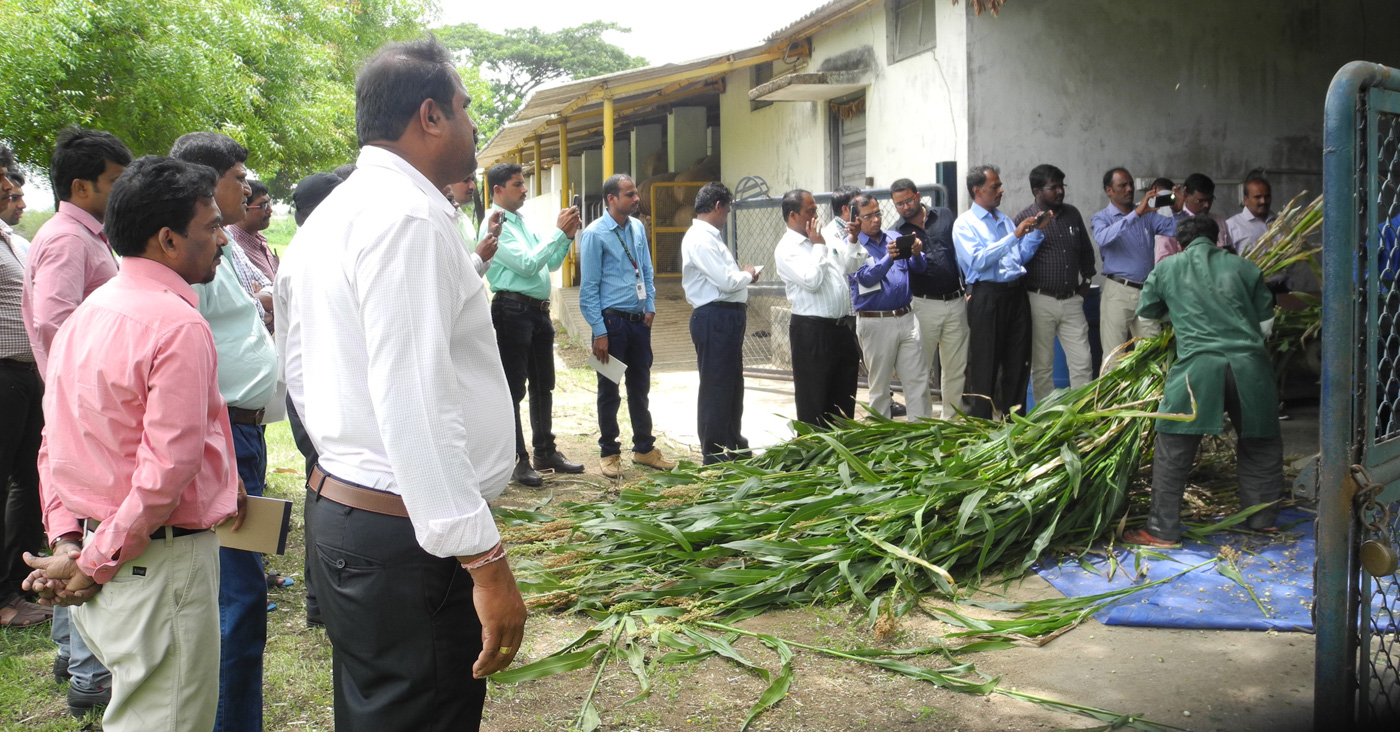 A training program on improving the basal diet of livestock, which mainly comprises of crop residues, was held for field veterinarians from the Indian state of Karnataka. This was for the Bhoosamruddhi project – a collaborative project between the Government of Karnataka (GoK) and CGIAR centers, led by ICRISAT.

The training focused on improving the quality of the basal diet – i.e. of the crop residues – and laid emphasis on exploring ways for improving livestock rations by fortification and densification. The objective was to make best use of feed resources in a context-specific manner, including supplementation and combination of different diet constituents, and physical feed forms such as feed blocks, feed pellets and feed mash.

Field veterinarians from four districts of Karnataka (Bidar, Chikballapur, Dharward and Udupi) were exposed to feed-based intensification (through cultivar selection of dual-purpose crops, chopping and supplementation), ways to address fodder deficit by linking fodder surplus-deficit areas (through feed-processing entrepreneurial ventures) and fodder preservation in the form of silage and hay. They were also trained in smallholder silage making through a live demonstration on the process.

ILRI scientists explained to the participants the use of near infrared spectroscopy (NIRS) tool for phenotyping of various crop cultivars for fodder quality analysis and invitro digestibility studies.  More than 30 field veterinarians and district heads of the Department of Veterinary & Animal Husbandry, Government of Karnataka, attended the training held on 4 July at ICRISAT headquarters.

In 2017-18, ILRI will work in 10 villages covering 100 farmers and demonstrate the impact of feed-based intensification, commercial fodder production and smallholder silage making. It is expected that the Department will use the experience in these 10 villages to scale up the program throughout the state. Besides the above work, ILRI will also support the government to pilot small- and medium-scale enterprises to produce and supply complete feed /hay /silage, based on context, in a business mode. Towards all of the above, the participants prepared a work plan at the end of the training.

In 2002, ICRISAT introduced an early maturing, high yielding and drought-tolerant groundnut variety (ICGV91114), which produced 15% higher pod yields, 17% more haulm and better quality fodder than the locally grown variety. Farmers who fed their cows and buffalo the improved fodder saw their milk production immediately increase by 11%. A subsequent impact study estimated that adopters of the new variety earned around USD 970 from the sales of groundnut and milk—four times more than from growing the local variety.

In the case of sorghum, it was found that sorghum stover from 1 ha (3.6 ton Dry Matter) with 3% units increase in digestibility can produce 345 liters of additional milk, which generates an additional income of ₹ 8,294/- to the farmer (since digestibility is more, intake will also be more and additional milk production will be 682 liters).