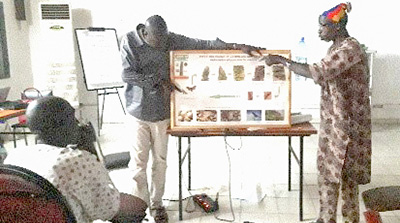 Seydou Yolo (in red cap) at a seed producers’ training on the biological control of the millet head miner at Sevare, Mopti region, Mali. Photo: CRS

Eight months of the year was the most farmer Seydou Yolo’s harvest would last to feed his family of two wives and fifteen children. From then on, cattle would have to be sold to feed the family for the following four months.

No amount of hard work could raise the yield from the farm of this farmer from Doundé village in Mopti region, Mali, beyond 4 tons, i.e., 3 tons from millet, 300 kg from sorghum, and 700 kg from groundnut, cowpea and fonio millet.

What turned the tide in his production fortunes was the training on biological control of the millet head miner. “The module was taught at a workshop in 2016. Following many other training sessions, my skills and knowledge of the right practices for millet and sorghum production technologies improved,’’ says Seydou. 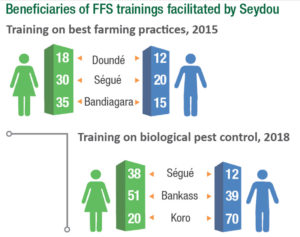 Today, he is a Farmer Field School facilitator, seed producer and resource person, all rolled into one, spreading the knowledge he has gained and teaching other farmers how to ward off deadly pest attacks that can decimate their millet and sorghum crops. He has supported many NGOs and the district agricultural extension services during the trainings.

Though Seydou has reduced the extent of sowing on his farm given the physical effort it required, his yields have risen. The use of quality seeds and improved agronomic practices in millet and sorghum gave him a harvest of 7 tons (6 tons of millet and 1 ton of sorghum). ‘’I could sell 480 kg out of the 680 kg of cowpea produced, earning about CFA 170,000 (about US$ 400) for household expenses. In addition, the fodder from cowpea as a result of intercropping, is being use for livestock fattening,” he says.

‘’Farmers in the community are open to testing new technologies. Once the benefits of greater yields became visible, they were more receptive to applying compost, adopting microdosing, using improved seed and treating them with Apron star 42 WS, intercropping (millet and cowpea) and the biological control of the millet head miner,’’ says Seydou. “Without USAID, ICRISAT and the project partners who exposed us to new technologies, neither would I have become a useful member of the community nor have the strong conviction that together we can make food insecurity a thing of the past with such interventions.’’