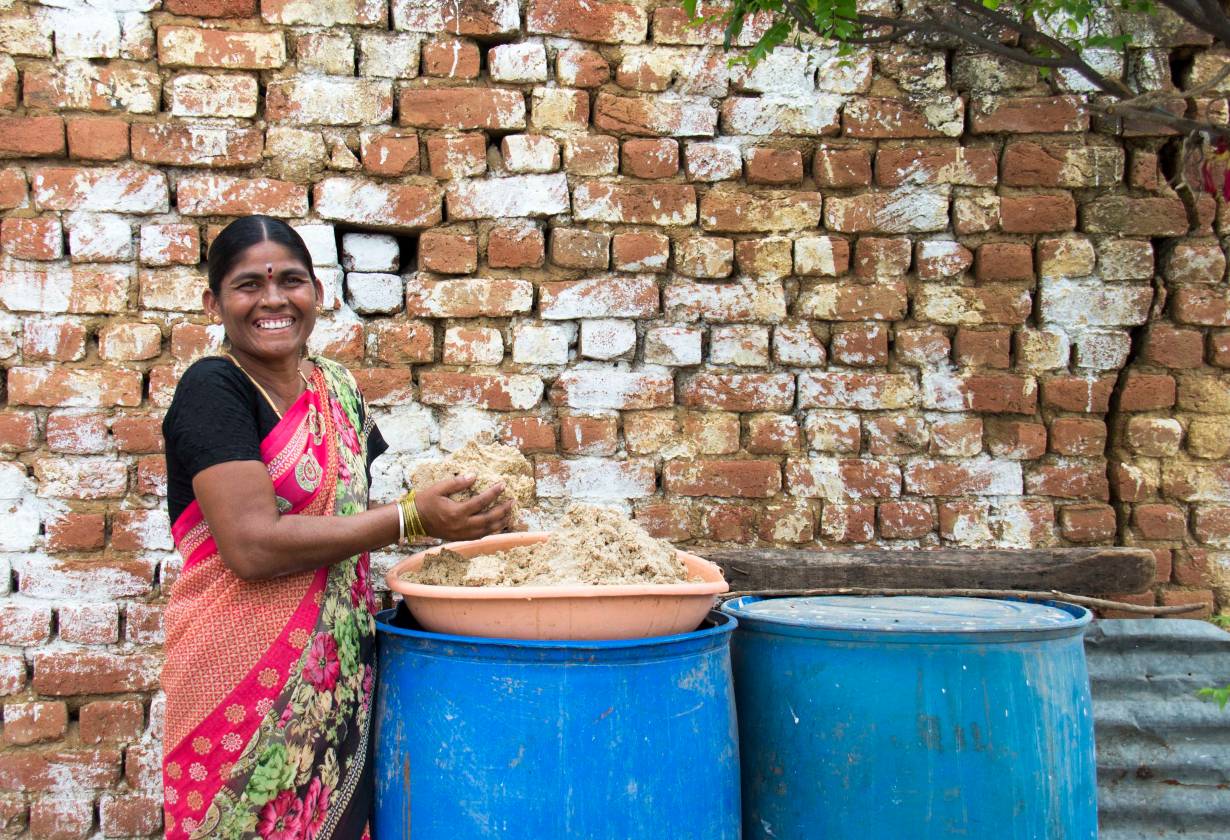 Yaadamma, who heads a women’s self-help group in Fasalvadi, holds some of the malt she collects and sells at her home. Photo: S. Punna/ICRISAT

More extreme weather events and shifting seasons is expected as a result of global warming, according to a 2009 Food Policy Report by the IFPRI. Rainfed farmers in developing countries are particularly exposed to climate change.

In India, while wealthier farmers have access to irrigation, most smallholder farmers rely on monsoon rains to get a good harvest, often succumbing to despair when rains fail. To improve their climate resilience, diversifying their farming and non-farming activities is important.

Thousands of farmers in the dryland region of Telangana in India used to depend solely on rainfed agriculture and their few cows and buffaloes for income. During drought years, their crop yield would diminish and so would the milk supply from their cattle due to lack of sufficient fodder. So the erratic and insufficient rainfall cut down both their income and food security.

In December 2011, the International Crops Research Institute for the Semi-Arid Tropics (ICRISAT) and leading brewery ABInBev started a sustainable development initiative, along with the non-governmental organisation Rural Education and Agriculture Development (READ), targeting some villages in Telangana, in India. One of its aims was to provide new income-generating activities for vulnerable families.

TURNING WASTE TO WORTH

The project looked at the spent malt, a byproduct of the beer manufacturing process, produced at the brewery. It is considered as a waste; however it is far from that. Spent malt (also known as brewers’ spent grain) has been used as cattle feed since ancient times. It is rich in moisture, cellulose, proteins, minerals and lipids, and is also a good source of dietary fiber. It is known to help milk production in cattle. Members of the women’s self help group

The brewery started regularly selling spent malt to women’s self help groups in the nearby Fasalvadi village. The groups then sell this to cattle owners as a nutritious feed for their livestock. The women use some of the profits to run welfare schemes for women and children.

The village head, Saayamma (67), says: “Since we started feeding the cows and buffaloes with spent malt, we’re seeing an increase in milk production by them. The cattle give at least two litres more milk per day than before. Not only that, the milk has higher fat content and better taste. As a result, the cattle owners are enjoying a good increase in income after this project started in our village.”

The leader says that this rise in the economic power of her villagers has also resulted in greater awareness about education and hygiene. Many farming families can now afford to send their children to private schools. “These children should not be deprived of the education that we could not get,” Saayamma says.

Apart from the tangible economic benefits, the spent malt project has also resulted in significant intangible benefits for women in the village.

Yaadamma, a woman who was chosen to head the self-help group in Fasalvadi, was given the responsibility of collecting the spent malt and selling it from her homestead. Today, the mother of three is a proud entrepreneur.

The increased income has given the women better health, dignity and confidence. Yaadamma and her husband share a respectful relationship as Yaadamma has considerable decision-making power and independence now.

Speaking about this project, Suhas Wani, director at ICRISAT’s Development Center, says, “We want to take a holistic, sustainable approach to rural development and believe that women play a key role in it. By increasing livelihood opportunities for women, such initiatives create better financial security for rural families, which are especially susceptible to climate change impacts.”

According to Ashwin Kak, senior manager at ABInBev: “This project helped us rethink our concept of waste; we realised that waste can become a valuable resource. Channeling the waste into cattle feed makes our breweries more sustainable and it is a win-win situation, as local communities like Fasalvadi benefit from this new circular economy. We now aim to scale up this initiative to include eight more villages and four more self help groups this year, not just in Telangana but also in Haryana and Rajasthan.”

The success of the spent malt initiative has shown that supporting rural women entrepreneurs is an effective and sustainable way to help rural women lift themselves out of hunger and poverty.