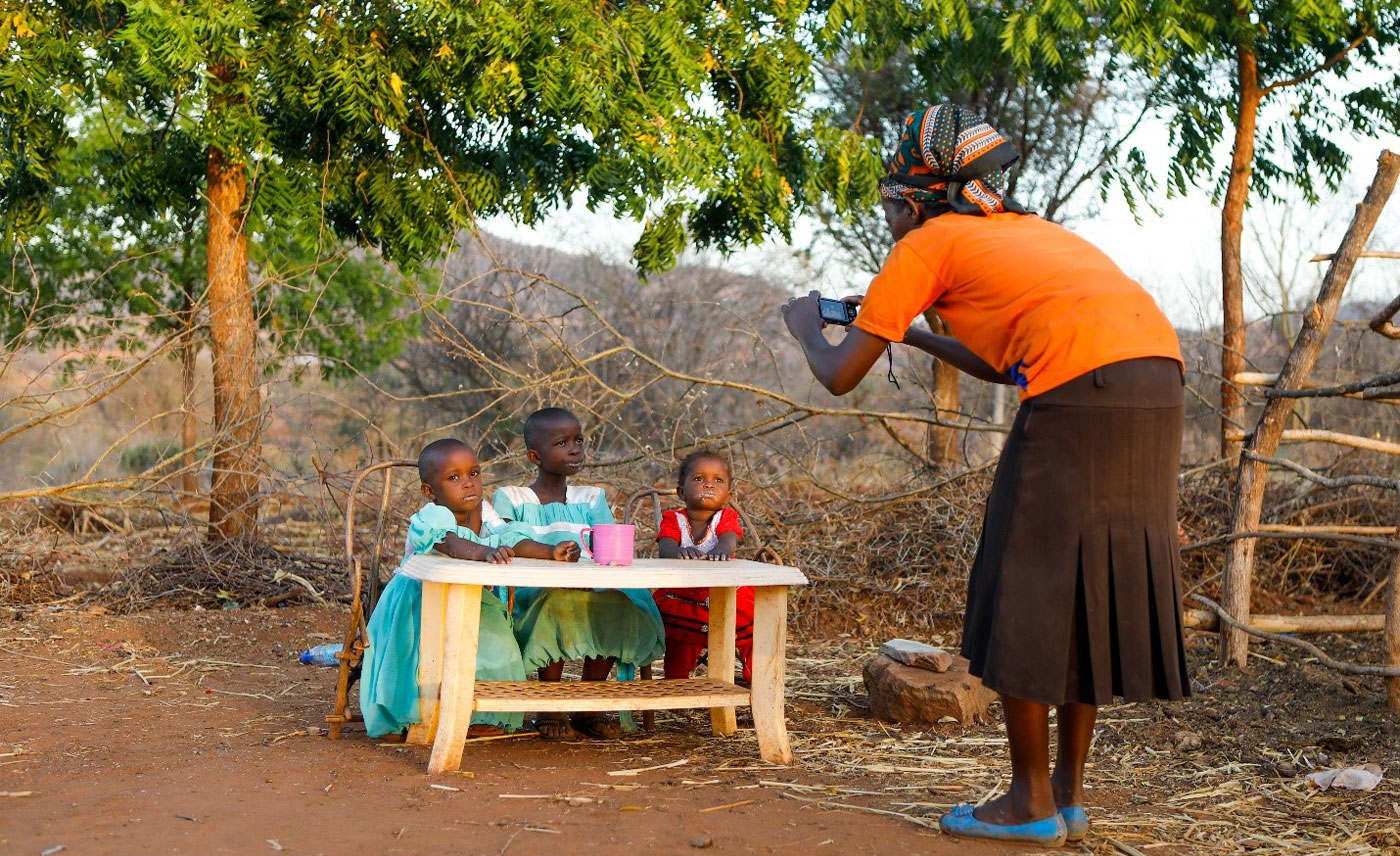 Novel ways are being explored to make nutrition interventions more effective and efficient in Kenya. The ICRISAT nutrition behavior change team recently used ‘Photovoice’, a methodology to assess the impact of activities implemented in one of the counties in Kenya.

Photovoice is a qualitative research method that uses photography for social action, to raise awareness and to stimulate behavioral change. “We are trying new methods to not only increase the accuracy of monitoring diets but also to make it fun and interactive,” notes Ms Christine Wangari, Smart Food Coordinator for East and Southern Africa.

The intervention was carried out in Tharaka Nithi, as part of the Accelerated Value Chain Development Programme (AVCD). “We used photographs as a tool for data collection,” says Ms Catherine Mwema, Researcher, ICRISAT. “We generated samples from two areas – a treatment site where nutrition activities had taken place and a comparison site where no activities had taken place.”

The team worked in partnership with the Tharaka Nithi Department of Health. “With the help of Public Health Officers, we selected 30 respondents of mixed gender and ages, based on random sampling, from each area to get a more representative sample,” says Mr Cornellius Muendo, Public Health Officer, Tharaka Nithi County. “Since 2016, we have been implementing nutrition activities in this county, specifically targeting Marimanti ward, and Chiakariga and Igambangombe counties within Tharaka Nithi County. For the assessment, we compared Marimanti and Gatunga wards.”

The respondents were taken through a full-day photography training with a certified trainer, Mr John Wambugu, and were given cameras to use for their ‘homework’ which was to capture photos of all foods consumed for the next 24 hours. Mr Wambugu introduced the respondents to the IXUS 175 and IXUS 177 digital cameras and demonstrated how to operate them. “They learned to tell a story using a camera,” he says.

On Day One, the 30 participants were introduced to photography and the power of photography in society to tell stories. They were then given an assignment after they had learnt how to caption pictures.

“On Day Two we went to see what they were doing and what they were capturing. It was very interesting to see them trying to implement what they had learnt,” says Mr Wambugu.

After the pictures were printed, the respondents went to the data collection point and used the photos to enter information about the food and ingredients used.

It was found that the photographs of foods consumed in the last 24 hours were an effective evidence-based approach that eliminated the challenges of the recall method. Mr Simon Nyaga, Nutritionist, Tharaka Nithi, says that he found the exercise very useful. “It captured information about foods that mothers and their children consumed in their homes. They did not have to strain to recall what they ate. The photos were a ready reference for us to assess the legume/cereal ratio and to understand if the meal was balanced,” Mr Simon adds.

There was a significant difference between the utilization of sorghum, millets and legumes in Gatunga (control or ‘no treatment’ site) and that in Marimanti (treatment site). Mothers from Marimanti used a greater variety of food groups in addition to the cereals and legumes. Mr Simon says, “Apart from legumes like cowpea and pigeonpea, they were taking vegetables and fruit. Mothers from Marimanti were also adding protein from animal sources, which is highly recommended.”

“We need evidence-based reporting wherein researchers are sure that what happened on the ground is exactly what is reported by the respondent,” says Mr Muendo.

Photovoice fulfilled this precise requirement of the researchers in Tharaka Nithi with very satisfactory results.