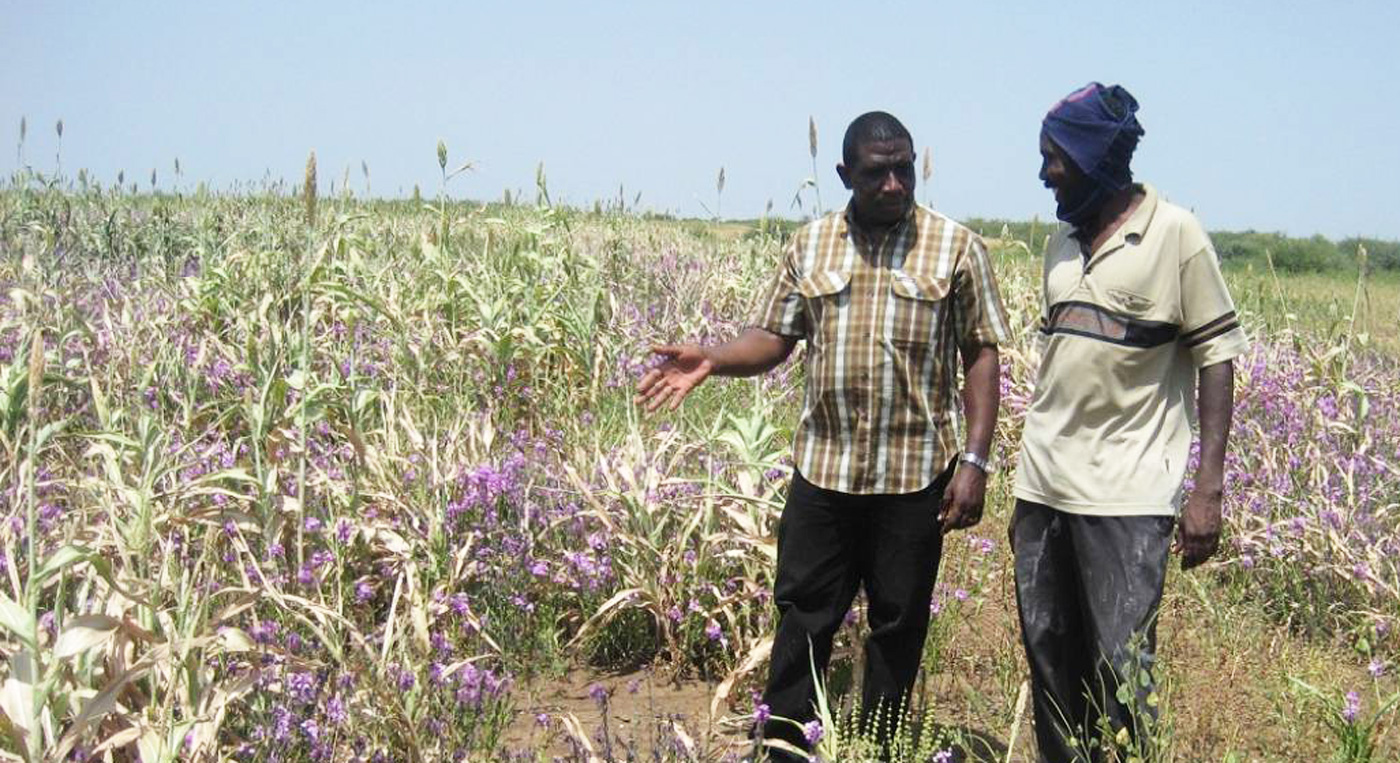 A striga workshop organised by the International Crops Research Institute for the Semi-Arid Tropics (ICRISAT) gathered experts from Europe, USA, Africa and Asia for two days (28-29 November 2017) in Nairobi to discuss viable and scalable options for eradicating this weed that has plagued sub Saharan African agriculture for decades. From soil fertility management, push-pull intercropping, seed treatment to crop improvement, solutions exist but progress on the ground has been modest so far. The striga specialists are calling to form an Alliance for Striga Control in Africa to reclaim the much needed food potential of millions hectares of striga infested fields.

Despite its striking purple flowers and potential medicinal uses, the parasitic nutrient sap sucking striga weed or witchweed is no innocent pest. A lasting and very damaging weed for the major cereal crops in sub-Saharan Africa, it can cause up to 100% crop losses across millions of hectares of farmland and an annual loss of several billion dollars.

Once the field is infected with striga, farmers can’t get rid of this pest easily. Like black dust, these tiny seeds produced in large quantities – one spikelet can produce over 50,000 seeds – spread rapidly within the farming community. The seeds can remain viable for up to 20 years under the right conditions until a host plant, usually a cereal crop like rice, maize, sorghum or millet, emits germination signal molecules called strigolactones at the root zone. The invisible pest develops underground, sucking life from the host root. After a month when it appears over ground, it is almost too late.

Researchers and practitioners have been on the case for decades, yet paradoxically, we still don’t know enough about the extent and intensity of striga invasion, judging by the differences in the figures on damage impact circulated by different scientists during the workshop. And although striga biology is now understood up to the molecular level, some practical aspects are not necessarily grasped by smallholder farmers. A young farmer who had just inherited a pristine plot of land borrowed ploughing equipment used in his father’s striga-contaminated fields and ended up spreading the weed in one season.

Julie Scholes, a professor from Sheffield University in the UK says there is still a lot to discover at molecular level on how striga and host plants interact. She uses rice as one of the host plants, which she inoculates with striga seeds under rhizotrons, large perplex root chambers that facilitate easier observation of striga invasion of the host and its development. Her work shows that there are different striga ecotypes with varying levels of aggression depending on host plant and agroecologies.

It has been observed that poor soil fertility and drought are worsening striga infection. Harro Bouwmeester, a professor from the University of Amsterdam has researched how soil fertility could affect plant signalling during striga interaction with the host. He reports about 20 different types of strigolactones that may or may not be specific to the host. Experiments in West Africa showed that in phosphate deprived soils, sorghum host plants were producing more strigolactones. On the contrary, phosphate fertilization could reduce striga occurrence by 40 to 80% and improve sorghum harvests by up to 142%. However, similar experiments in maize fields in Eastern Africa showed less effect with nitrogen fertility levels. It shows that further soil and water management research is needed to better understand which soil qualities could block or slow striga infestation.

Many approaches have been tested to fight striga with varying levels of success. These range from low tech solutions, like the use of trap crops, like desmodium a cover crop that induce “suicidal germination” of striga seeds without allowing the striga plantlet to anchor to their roots, to more sophisticated practices, like seed treatment – eg IR maize popularized by the African Agricultural Technology Foundation – or the development of striga resistant crops through plant breeding. Most experts admit that adoption of such innovations has not been high in many African countries although there are limited studies to explain the observed low adoption among farmers.

Build a global coalition against Striga, and a strong case for action

While Jeff Ehlers, senior programme officer at the Bill and Melinda Gates Foundation recalled working in Western Kenya around Lake Victoria, in late 1980s, with 6 million people affected by the weed at the time, recent statistics provided by agricultural economist Hugo deGroote at CIMMYT, who studies striga economics for years, shows that in this striga belt, as in many parts of Africa, the scenario unfortunately worsened with even more people affected.

There is an urgent need to work with farmers and social scientists to understand what would trigger adoption or rejection of some interventions. The push pull approach for instance may be effective in pilot testing but farmers who practice intercropping may not want to replace essential food crop like groundnut with  desmodium intercrop. While breeding for resistance, plant scientists should consider that farmers may reject a new variety if the shape of the plant, taste and colour of grain are far from their usual expectations.

We need to look at the practicalities, access and affordability of the solutions to fight striga and ensure we use a multidisciplinary approach including microbiologists, breeders, agronomists, soil scientists, economists and sociologists.

Despite the recent discoveries, there are still many knowledge gaps about this versatile weed and it is not easy for decision-makers to know where to start to eradicate striga. Dr Senait Senay, research associate on ecological informatics at International Science & Technology Practice and Policy (INSTEPP), showed how mapping scenarios of pest invasions can help prioritize geography of interventions, evaluate costs and benefits of eradication programmes. The GEMS platform (GEMS stands for Genetics x Environment x Management x Socioeconomical data) , modelling presence and absence of a pest – striga in this case – against layers of environmental data like climate, soils, can then map the risks of striga infestation now and in the future.

The Economics of Land Degradation Initiative has recently built a case for more investments in land rejuvenation, assessing the global cost of inaction on soil health. Likewise, the striga expert community need to build a comprehensive narrative on why the fight against striga is still so important today, to mobilize governments and donors, farmers, development and private sector.

A first step forward would be to form an Alliance for Striga Control in Africa which could define a common research for fast action agenda to fight striga and reclaim the much needed food potential of striga infested lands.