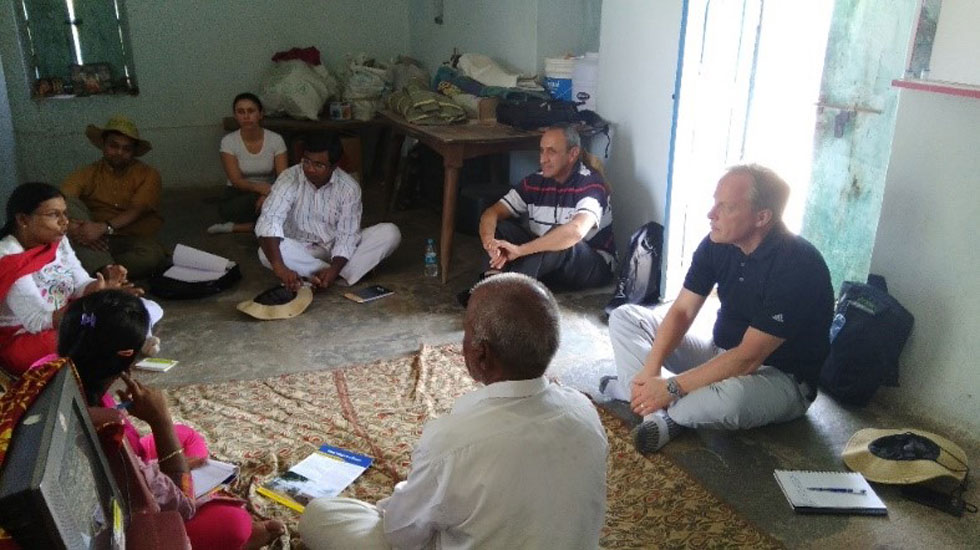 “Villages and urban towns are coming closer. Better roads, infrastructure and connectivity, improvement in transport facilities and greater market integration are helping in easily linking villages with urban towns and cities. Mobile phones, television and internet have now become important sources of information on all facets of the rural economy, enabling better communication with input and output market dealers as well.”

Dastha Reddy who lives in Dokur village in Mahbubnagar district, Telangana state describes the effect of the phenomenon of urban sprawl.

We had the opportunity to visit Dokur village on 22 March, 2017 as part of a joint project between ICRISAT and the Swedish University of Agricultural Sciences (SLU) on “The Dynamics of Urban Sprawl: Land-use changes, Food Supply & Sustainable Agriculture Production Systems in the Arid & Semi-Arid Zones”, a part of which was a village immersion to give us a better understanding of the dynamics of urban sprawl at the grassroots level.

The project team interacted with the farmers and conducted Focus Group Discussions (FGD) to understand and identify the resilience and adaptability of the semi-arid agro ecological systems of India to the rapidly urbanizing global economy.

The visit was educative and gave us insights into farmers’ perceptions and responses to growing urbanization in relation to cropping pattern changes, resource use, food consumption, education and women empowerment and their expectations and aspirations vis-a-vis urbanization. The project interacts with a farmer. Photo: P Jyotsna, ICRISAT

Dastha Reddy and many other villagers felt urban expansion had influenced all aspects of village life. “We have begun diversifying agriculture into growing green leafy vegetables and seasonal vegetables like ladies finger and tomatoes. Even floriculture is picking up here due to the growing demand for flowers (marigold and crossandra) from urban areas. Mechanization is now more visible and acceptable due to labor shortage. Agricultural land is sold at higher prices and converted for other uses like the construction of hostels for students, marriage halls for social events in the villages, or as residential plots,” he explained.

He says there is a greater awareness about personal hygiene, dressing and nutrition. The lower pollution in the rural areas is also attracting urbanites. Buchamma, another respondent, is engaged in non-farm work and is a contractor who pools labor for work under the Mahatma Gandhi National Rural Employment Guarantee Act (MGNREGA). She sees a bright future for agriculture in Dokur in the next 5-6 years. The village’s water tank which had gone dry due to 8 years of continuous drought, has been filling up in the last two years as a result of the government’s intervention in desilting, strengthening bunds and linking the tank with water sources outside the village through canals. This thought was echoed by other villagers as well during the focus group discussions we had.

Overall, it was an enlightening experience on the dynamics of urban sprawl!