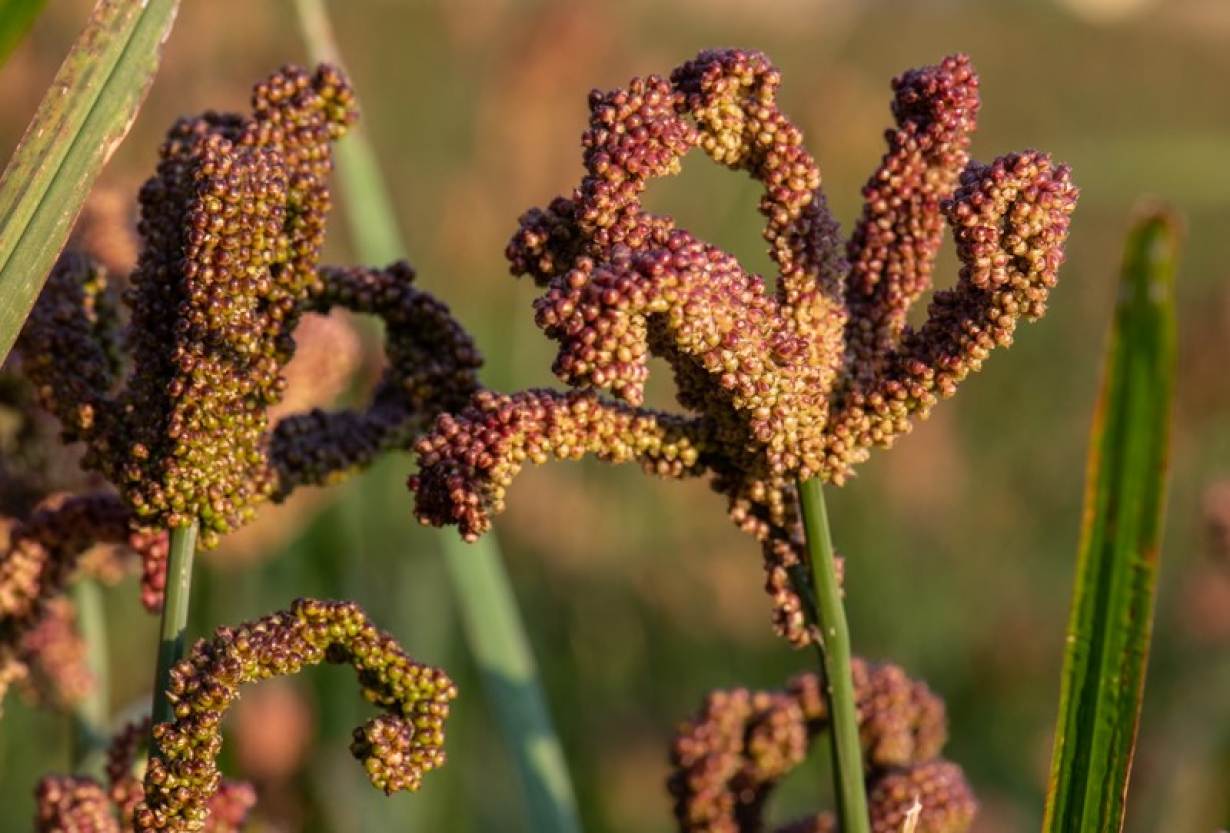 Finger millet can be grown at altitudes ranging from sea level to over 2000 metres above sea level, can withstand drought, and has high levels of essential amino acids and micronutrients

Dr Chrispus Oduori kneels amidst a sea of colorful plastic buckets in a screenhouse in Western Kenya and shifts some leaves of young finger millet plants till he finds what he’s looking for.

“Here it is. Striga!” Oduori points to a shoot emerging at the base of one of the millet plants “It’s a weed that’s a parasite on the crop, and it can cause total loss at harvest time.”

“But there’s hope.” Oduori, a Kenyan finger millet breeder, points to plants in the neighbouring pots which have been inoculated with Striga. “These are wild relatives of finger millet and some of them are showing resistance to Striga.”

Wild finger millet is native to the Ethiopian and Ugandan highlands. It can withstand cultivation at altitudes over 2000 m above sea level, has high drought tolerance, and high levels of micronutrients. Pictured are panicles of Maridadi, one of the finger millet varieties released by Dr Chrispus Oduori. Supplied: Michael Major/Crop Trust

The return of finger millet

Finger millet can be grown at altitudes ranging from sea level to over 2000 metres above sea level, can withstand drought, and has high levels of essential amino acids and micronutrients.

Farmers have been cultivating finger millet for thousands of years. It is still an important subsistence crop in small-scale farming systems, particularly in parts of eastern and southern Africa as well as in India. In Kenya, it is used for making foods like ugali, a thin stiff porridge, and busaa, a local brew. Oduori hopes that soon the crop will stage a comeback in Kenya after being largely replaced by maize and sorghum. Interest in finger millet is in fact growing worldwide, even outside its centre of origin.

“Finger millet is extremely nutritious and grows well in a wide range of locations, including marginal environments,” Oduori says. “Many farmers are recognizing finger millet as a smart food and are now planting it again.”

Oduori is well placed to tout not only the nutritional but the agronomic benefits of finger millet. He has spent the past 30 years working with the crop and became the first plant breeder to release improved varieties of finger millet in Africa.

“With climate change we will see even greater outbreaks of pests and diseases due to weather extremes. We’ll see more Striga, for example, if climate change leads to drier conditions,” Oduori says.

Striga, or witchweed, is a particularly nasty parasite. The sap-sucking weed can lead to complete loss of crops and once it’s in a farmer’s field, it is nearly impossible to eradicate.

Oduori hopes that losses due to Striga can be minimised by finding wild relatives of finger millet that have resistance to this as well as pests and diseases.

“Our initial evaluations under controlled conditions showed that some of these wild relatives performed very well and showed resistance to blast and Striga,” Oduori said.

This effort is funded by the Crop Wild Relatives (CWR) initiative, a global, 10-year project, supported by the Government of Norway. The initiative is managed by the Crop Trust, an international non-profit organization charged with conserving and making available crop diversity in genebanks.

“Finger millet is one of 19 crops we are supporting via our pre-breeding projects,” says Dr. Benjamin Kilian, a scientist with the Crop Trust. “Our aim is to introduce beneficial traits from their wild cousins into cultivated crops so they are more resilient to climate change.”

Dr Damaris Odeny, a scientist with the International Crops Research Institute for the Semi-Arid Tropics (ICRISAT), is sequencing the genome of the crop wild relatives and identifying molecular markers, or specific snippets of genome, to help breeders. “An earlier project collected wild relatives of finger millet in the countries where the crop originated: Ethiopia, Tanzania, Kenya and Uganda. We now know them down to their DNA,” says Odeny.

But these wild relatives lack many of the traits which Oduori bred into his lines, like really high yield, a grain color that’s acceptable to consumers, erect stems, shatter resistance, and early maturation.

“So we need to introduce the desirable traits from the crop wild relatives into the farmer-preferred varieties,” Odeny says. “This will take a lot of crosses and backcrosses, and a lot of time, but these wild relatives do offer us hope that we will be able to breed a really successful Striga-resistant finger millet.”

That is music to Chrispus Oduori’s ears as he reflects back on a time when finger millet fed the people of Eastern Africa. He has spent his career trying to get finger millet back in farmers’ fields and consumers’ plates. Thanks to some unlikely looking plants he may well achieve his goals soon.