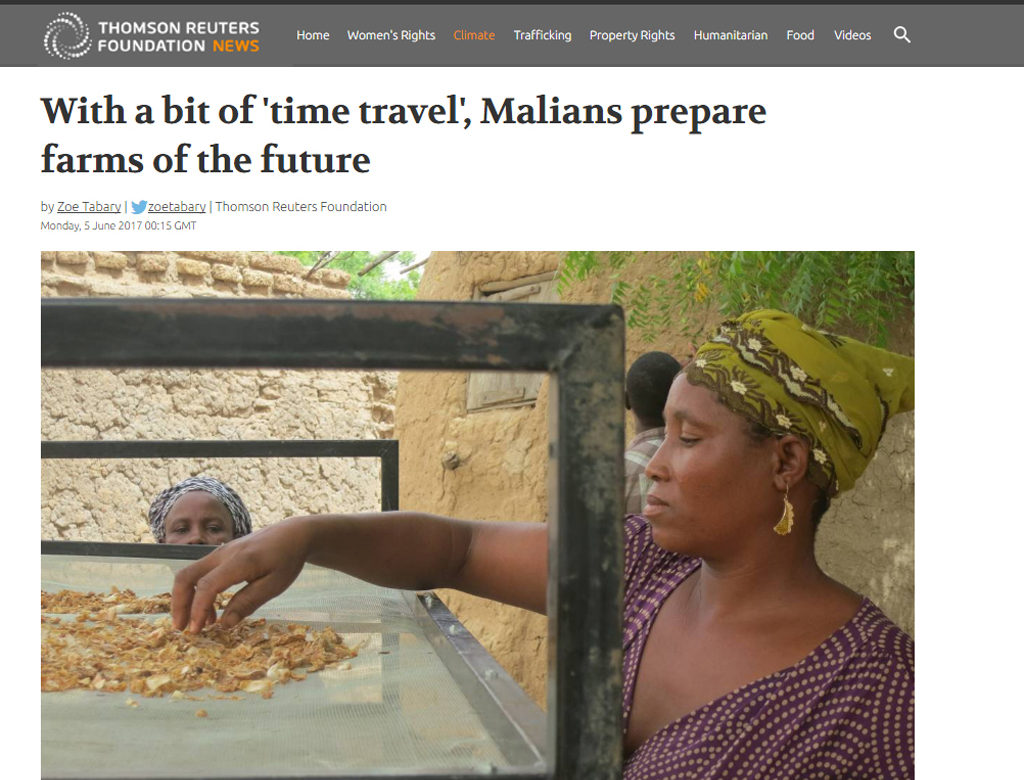 Nouhoun Tigana, a farmer in rural central Mali, doesn’t know for sure what the weather will be tomorrow – other than that it’s likely to be blisteringly hot again.

“The heat is so bad now that we can’t work between noon and 3 p.m.,” he said, waving a skinny pigeon away from the chicken coop he is guarding.

Oddly, however, Tigana now has some idea of what conditions might look like 30 years from now in his village, near the southern fringes of Africa’s Sahel zone.

That’s because, with 30 other farmers, he last year climbed into a Jeep and headed off for a bit of “time travel”: A visit to the Mopti region, to the northeast, that today has the kind of conditions experts believe Kolondialan can expect in decades to come as climate change takes hold.

“The idea is to get communities to learn from each other by visiting an environment that is similar to their own – so based on farming – but not identical in terms of climate conditions,” said Bouba Traoré, a scientist at the International Crops Research Institute for the Semi-Arid Tropics, one of the organisations piloting the “farms of the future” project in Mali.

“It’s like they are visiting their ‘future village’, if temperatures were to continue to rise and rainfall to decrease,” he added.

The initiative is part of the Building Resilience to Climate Extremes and Disasters (BRACED) programme, supported by Britain’s Department for International Development.

Kolondialan, like many villages in central Mali, is grappling with recurring periods of drought which destroy crops and make it increasingly difficult to work in soaring temperatures often reaching 45 to 50 degrees Celsius
(113 to 122 degrees Farenheit).

“But we can’t sit here and do nothing. We have to find a way to get by,” Tigana said.

The farmers are working on ways to adapt to the changing conditions, such as experimenting with new crops and trying to find additional sources of income beyond crop farming, to build their resilience to worsening harvest losses.

But making those efforts effective for the long run will require adapting not only to the tougher conditions being experienced now but the even harsher ones to come, experts say.

Over the past year, with the help of climate experts and an online weather prediction tool, Tigana and other local farmers have helped identify villages further north – such as Bankass and Koro – that are experiencing the kind of climate conditions Kolondialan could face in 30 years’ time, mainly higher temperatures and less rain.

Men and women from Kolondialan and a nearby village have then traveled to visit them, to understand how residents there are coping with current weather.

After the visit, each of the project village has received a grant of 1 million CFA francs (about $1,700), which it can spend on any kind of adaptation effort its community groups decide on.

“We hope that by seeing how farmers have adapted to a hotter climate, for example through smarter farming techniques and new ways of sharing weather information, visitors will implement these innovations at home,”
Traoré said. The online weather tool used by the farmers, called Climate Analogues and developed by the Climate Change Agriculture and Food Security research programme (CCAFS), allows users to locate areas whose current climate is similar to the projected future climate of their own area, based on precipitation and temperature data.

“Although they are only a few hundred miles apart, a village like Kolondialan in the Koulikoro region receives on average about a third less rainfall than Bankass in Mopti,” said Traoré. “That makes a difference to what crops you can grow, and when.”

Maarten van Aalst, director of the Red Cross Red Crescent Climate Centre, said that improving Sahelian communities’ generally limited access to weather information is key. But even more important, he said, is placing it in the context of their lives, “so they can understand what’s coming”.

“Being confronted with the possibility that future climate conditions could be even more challenging than current ones is a good way to get communities to invest in resilience,” he added.

INVESTING IN CHICKENS AND STOVES

Tigana’s community has settled on one particular option to fight higher temperatures and crop losses: Chickens.

He stands in front of a group of men and women huddled together on a bright blue carpet.

“At the end of the month your household will get a loan of 50,000 CFA francs (about $85) for the next half of the year,” he tells the crowd, which greets the information with a murmur of approval.

“We recommend you use this money to buy chickens, which we will help you raise so you can sell them at a profit at the market,” he said.

The public meeting, chaired by Tigana, aims to share with the rest of the village the measures the village’s community group have decided on after their “future village” visit to the Mopti region.

These include buying and fattening animals like chickens and goats before selling them at a higher price, as well as protecting maize harvests more effectively by hanging them in trees, out of reach of pests, livestock and floods.

The activities vary from one village to another, said Traoré, depending on the farmers’ skills and the resources available.

For example, in the village of Sibougou – also in central Mali – the community has chosen to build stoves made of mud and straw, which burn less wood, as well as insulated baskets, which conserve heat to cook food even when there is no sun.

Mariam Touré, a farmer who has been using the improved stoves and baskets since the beginning of the year, says they have allowed her to start her own bakery business while still reducing her wood consumption by about 25 percent.

“God is angry at us for using so much wood so he sent us this drought,” she said, wrapping up loaves of bread in yellowing paper. “Hopefully we can change his mind by using less wood.” John Riley, project director at International Relief and Development (IRD), a charity managing the BRACED project in Mali, said the “farms of the future” approach aims to “help communities grow more independent in the long term, rather than rely on external assistance”.

But a recent rise in jihadist attacks in Mali’s north – and increasingly in the country’s centre – have hampered progress. A ban on motorcycle travel, aimed at reducing the attacks, prevents farmers and field agents from travelling to the villages they’re meant to visit or assist, Riley said.

“They [the bandits] aren’t necessarily against our work with farmers but they often think we’re plotting with the government to get rid of them,” he said.

“As a result we’ve had to stop or relocate activities in about a quarter of the villages we operate in,” he said. “That’s tricky because while we may leave, the communities are still there and grappling with the same challenges.”

For now, said Traoré, security and budget permitting, the project hopes to repeat the “farms of the future” experience in other regions in Mali, and in neighbouring countries.

The Thomson Reuters Foundation is reporting on the BRACED program to support the program’s goal to develop and disseminate climate resilience knowledge. Alex Potter reported from Mali with support from the International Reporting Project.