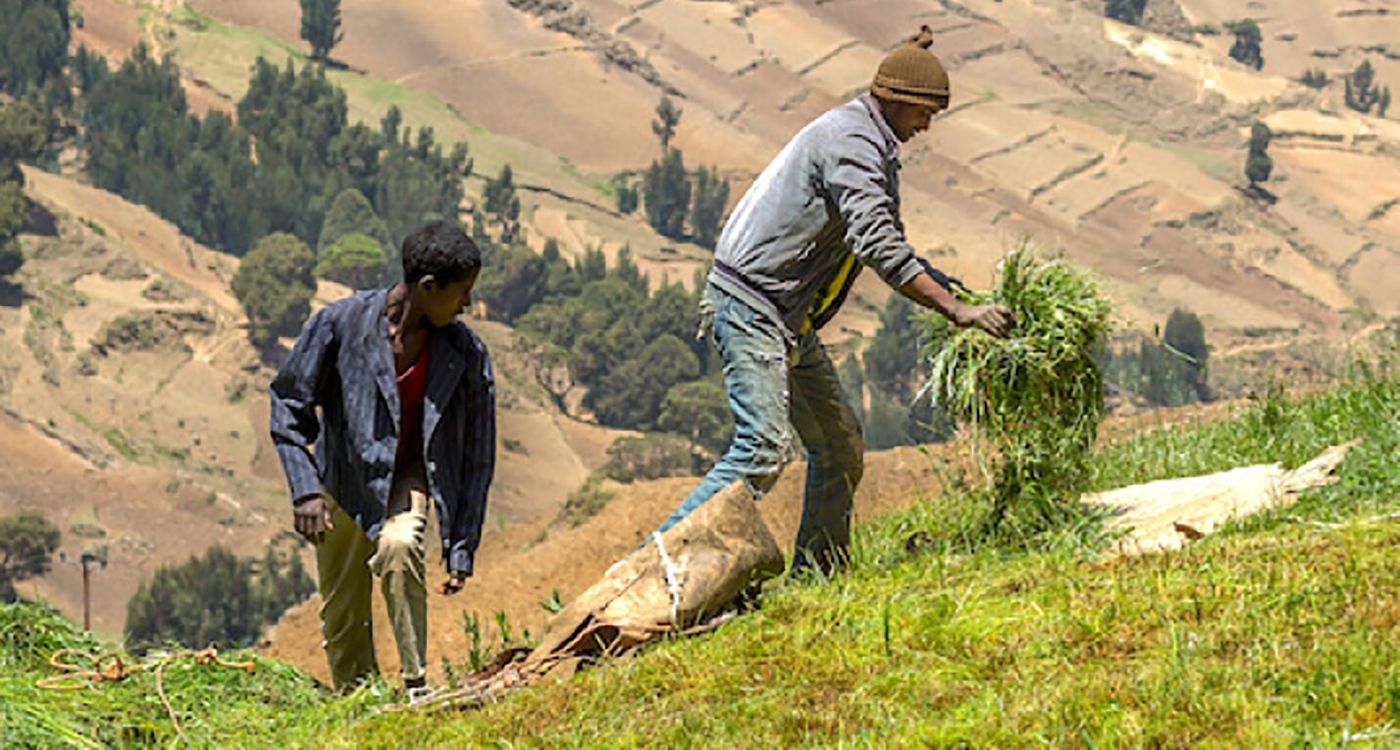 If you’re trying to win the trust of a community, you don’t start by building rat houses on their land. But that’s just what some residents living on Ethiopia’s Yewol mountain worried scientists were doing. They saw the slow construction of stone-pile terraces along their mountainside. And they were suspicious.

But the terraces were a small part of a big plan to restore and revive the Yewol watershed. It was an area plagued by food scarcity, erosion, over-grazed lands and unreliable rain. And when it did rain, the water rushed down the slopes, taking with it vital soils and nutrients. Over decades, the lands had become dry, unstable and unable to support enough crops and livestock to feed its people. 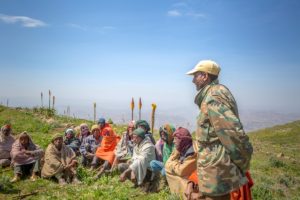 Seeing the prospects of restoring this lost potential, scientists from The International Crops Research Institute for the Semi-Arid Tropics (ICRISAT) began working with the communities and governments to transform the mountain from top to bottom.

The supposed “rat house” terraces were among these technologies. By building small walls made of fist-sized rocks in some places, and digging ditches in others, the rush of rain water could be slowed down. This keeps nutrients and soils in place, and allows rainwater to refill aquifers. Local farmers – men and women – did the work themselves, each committing to work 60 days to build terraces and other structures. For months, they thrust shovels and hands into the dirt, lugged stones and soil, built and rebuilt walls. But it wasn’t until the months wore on that they saw the results. And their worries – rat-related and otherwise – began to diminish.

More food. Higher incomes. A revitalized environment. It’s with these results that the scientists began to build the key ingredient to any transformation: trust. But they’d have to earn it from nearly 2000 households living up and down the mountain.

Erosion on Yewol had been worsening for decades – probably even centuries. It was an area of growing poverty, food insecurity and increasing out-migration. But in 2013, ICRISAT persuaded district authorities that the whole watershed could be developed as a showcase – a revived and resilient landscape that could serve as an example to other districts. So they mobilized the communities to work together, collaborated with a local university and district administrators, and tackled the mountain’s problems from top to bottom.

This of course involved various techniques, some ancient and some brand new. And it also meant approaching the mountain like a three-tiered landscape. There was the mountaintop, with its cool climate, frost risks, over-grazed lands and wind-exposed vegetation. Then there was the middle, where many families lived, but they struggled with the irregular water supply, wind and the eroding slopes. And there was the bottom of the mountain, home to hundreds of families working flat farmlands and coping with occasional floods rolling down from up top.

But the goals for each of the areas were the same: help the farmers make a living, build resilience to increasingly unpredictable weather incidents, and ensure land and water decisions in one area wouldn’t negatively impact natural resources or communities in another.

The top of the mountain was most problematic. Before the project, there was little successful horticulture and agriculture. It was mostly used for free grazing by livestock farmers. This harmed prospects for farming, as the animals often ate and trampled crops. So the community agreed to new rules barring livestock from grazing. Instead they promoted the growing and harvesting of fodder, which can be delivered to the animals. 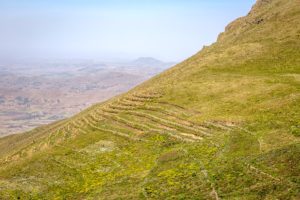 At first this change brought some community pushback. “There were guys against managing the free grazing,” says Tilahun Amede, who oversees ICRISAT’s contribution in partnership with the CGIAR Research Program on Water, Land and Ecosystems (WLE). “But now they are supportive because they see they can sell fodder from their own farms. Also they saw that animals were sometimes not only destroying the land, but the structures built by the farmers too.”

The grazing rules have helped ensure cropland remains healthy. It’s this kind of “trust via proof” that helped the scientists mobilize the farmers. They began to introduce more and more interventions. Backed by their data analysis, they advised on fertilizer use and irrigation schedules. They provided new seed breeds for apples, carrots, potatoes and spices – experimenting with crops that could grow in tough climates. This diversity meant farmers no longer needed to rely on only a few crops. They now have nine or ten that can boost the nutrition of families and be brought to market. And diverse crops reduce the risks of disease or a weather incident wiping out a farmer’s yields.

There were failures, of course. At one point scientists recommended and distributed chick pea seeds to replace faba beans that were destroyed by an unknown fungus. “The farmers believed us and accepted our recommendation,” says ICRISAT/WLE’s Tadesse Gashaw. “But the frost destroyed all the chickpeas and the farmers were not happy.”

But trust-building has its bumps and on Yewol, they lost little momentum due to other successes, and the ongoing nurturing of the relationships. “The scientists, community leaders, officials and farmers have been open with each other. We feel like we’re all in this together,” explains Gashaw.

Trust also had to be built across topographies – among farmers at the top, middle and bottom of the mountain. The terraces and ditches helped, and farmers also dug ponds to capture and use rainwater. So, instead of rains rushing down the mountain delivering damaging salt, sand and silt to the lowlands, the rainwater feeds groundwater reserves.

Some of this water then emerges on the mountainside as irrigation-ready springs. Farmers were supplied with pumps and pipes to help them irrigate their own lands and sell water to others. The springs also join together and form and feed rivers, benefiting downstream farmers.

“Before they developed the springs, the area was quite dry and brown,” explains Wollo University’s Dr. Asmare Dejen, pointing to green patches dotting the landscape. “Now you can see the mountain has tiny oases, each surrounding a newly developed spring. They use it for harvesting potatoes and grasses to feed their animals.” 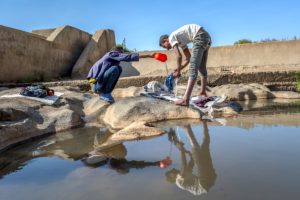 Boys in the Yewol lowlands use water for chores. Photo: Mulugeta Ayene/WLE

And in the lowlands, with improved quality and more predictable flow, communities are building dams and canals to better harness this water.

“I remember once a guy taking a picture of us sharing drinking water with animals. As a human, it was… degrading,” said one farmer who leads the local water user’s association. He and his members now have much better water access and, “due to effective community mobilization and awareness creation, we have noticeably reduced conflicts around drinking and irrigation water.”

The project did, however, employ healthy competition to mobilize the farmers. “We distribute different seedlings (acacia, coffee and others) to the farmers,” explains Dr. Asmare. “If one farmer surprisingly gets a bigger tree and a greener land, they win a prize – money or better seedlings. So there is competition among farmers to make the greenest area.”

But nothing brings buy-in like achieving real results. Together, the irrigation projects, the seeds, the grazing rules, better soil management, agroforestry, support for farmer cooperatives and other technologies have brought real change to these communities.

Only about a third of the participants said they faced food shortages in the past year, while 80% of the control group suffered this fate. And 90% of the participants described their livelihood status as either significantly or slightly improved over the course of the project. This compared with less than half of the control group over the same period. 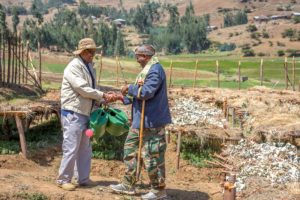 Wollo University’s Dr. Asmare hands over watering cans to farmer Mohammed Said, to signify the handover of the project to the community. Photo: Mulugeta Ayene/WLE

Omar Said, a highland farmer, says the extra income really helped his family during a tough spot. “My daughter was sick and I was able to take her to Dessi hospital. If I wasn’t able to make money from this project, I would have had to go to the local lenders or search for money from richer community members,” Said explains. “My child is ok now. She’s 12. She suffered a nerve problem and we got her the surgery.”

So, since the project began, the mountain has seen its share of social benefits. And environmental and agricultural progress. It’s also seen a Deputy Prime Minister and even a helicopter landing.

“I received a call on a Friday saying we are expecting some very important people so I flew in next morning,” recalls ICRISAT’s Amede. “When I arrived, I waited and waited and the Deputy PM showed up! And the local administrators were talking about how successful they were in mobilizing the community. So I was very pleased that they had taken ownership over all this.”

The visit allowed the community to feel like a role model instead of a challenge. “The deputy PM called this area “Yewol flower’ because he was so happy to see the production in the mountain area. This really encouraged us,” said one local farmer.

And pride outside Yewol is growing too. Travelling to a project in Afar state, Amede ran into a State Minister who had visited Yewol. The Minister turned his mobile phone towards Amede to show him the phone’s wallpaper – a shot of the Yewol watershed from his visit years before. “I was so impressed by the passion of that guy, and he keeps asking how it’s evolving,” says Amede.

In fact, Ethiopian governments are impressed enough that they are starting to scale the model across other watersheds. Wollo University replicated this experience in five other districts, using their own government resources. And over 20 other areas are being considered for similar projects.

Of course for the local farmers on Yewol, they are still focused on their own circumstances. Things are going well, but new challenges arise. “We are happy to be selected as this model,” comments farmer Omar Said. “But the constraint now is that we have to cultivate by hand digging because we have restrictions on bringing in oxen.”

Such challenges will no doubt continue to arise. And each one provides more opportunities for scientists, government and community to work together. “It is difficult to change a system,” said Mohammad Said, a farmer living in the mid-lands of Yewol mountain. “But if we can trust each other, all things are possible.” 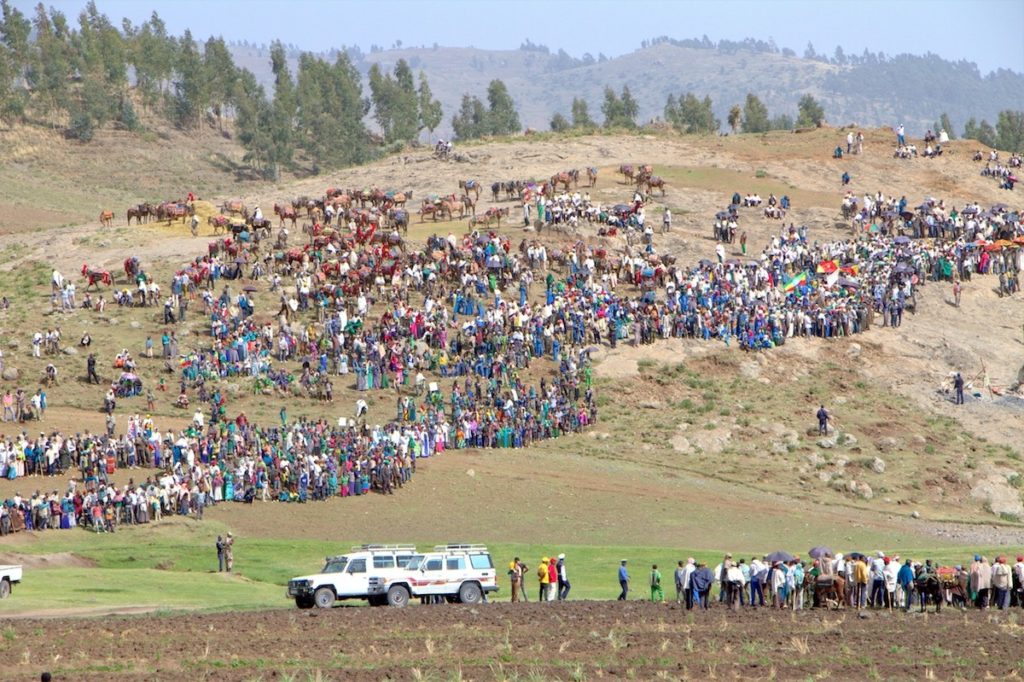