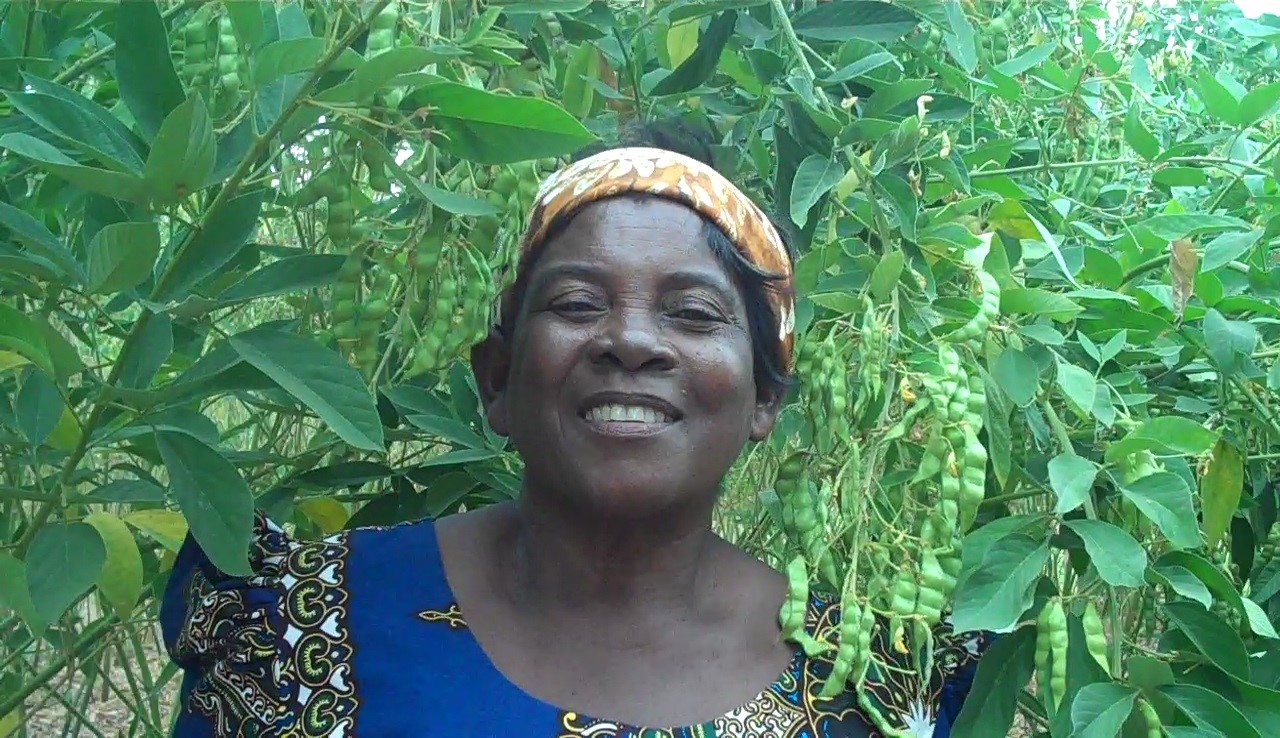 Farming became the only option for Witness Ngwira after losing her husband. It provided food for her family. But farming too was not so viable given the erratic rainfall, lack of inputs and knowledge on improved farm practices that made it more challenging for small-scale farmers, especially women.

Not one to give up, Witness joined a local farmers’ club called Chigomezgo which partners with ICRISAT Malawi to produce pigeonpea seed.

“Knowing I could not provide my children with enough food and clothing broke my heart. Now I am a very happy person because I am able to provide my family with not only food and clothing, but also education and all the other needs that they require,” she says.

Witness joined the club in 2011 and received 5 kgs of pigeonpea variety called ‘Mwaiwathu alimi’ a local name meaning ‘farmers’ opportunity’. This pigeonpea variety promoted by the club is improved and matures early. Using improved farm practices Witness increased her hectarage from 0.5 to 1.5 within two years of joining the club, hence increasing the crop yield from an average of 0.5 to 1.5 tons.

The early maturing nature of the variety enables Witness and other members of the club to offset the effects of low rainfall which is not a rare occurrence in Karonga district, Malawi. Unlike other farmers in the district, the club members have been capacitated with information and strategies to transform pigeonpea production from subsistence farming into a commercial activity to generate income.

“Previously, we were producing pigeonpea for our own consumption, but now we club members make a lot of money from the same crop. For instance, I made up to 1.3 million kwacha (USD 1786) in 2014 and using that money I started a small-scale poultry business which has greatly improved my family’s living standards,” she adds.

Small-scale farmers produce way below the production potential of their land holdings in Malawi. Female farmers in particular work extra hard for returns that are meager as compared to their male counterparts. Recent data shows that female-managed land is on average 25% less productive as a result of differing levels of knowledge and access to inputs for improving farming efficiency.

Ironically, women are the biggest contributors to Malawi’s national food production –they perform 50-70% of all agricultural tasks, and produce over 70% of the food that is consumed locally.

The United Nation’s Special Rapporteur on the Right to Food puts women empowerment at the Centre of food security strategies, saying it is the most cost-effective measure to reduce hunger and malnutrition for all.

ICRISAT Malawi’s strategic focus has been on women and youth to unlock the potential of legume-based farming systems. Importance is given to strengthening seed supply by promoting second generation (basic) seed production through farmer clubs.

Under the Irish Aid – funded Malawi Seed Industry Development Project (MSIDP), small-scale farmer clubs are provided with improved legume and dryland seed varieties along with training on technologies and agronomic practices. Farmers are taught to plant groundnut in double rows as a way of maximizing production and also trained on correct spacing and spraying time.

Many women besides Witness Ngwira have benefited from ICRISAT’s commitment to improve the lives of women and youth through legume production. Malita Phiri 29, a member of Chiyembe Farmers’ Club in Mchinji district started producing groundnut variety CG7 in 2015 and has experienced her life transform in a period of two years. After selling the produce from her 0.5 hectare, Malita bought a motorbike which has eased the problem of transportation for her family. In 2016, she increased her hectarage to two hectares and made enough money to construct a three bedroom iron sheet thatched, solar electrified house where her family lives currently.

Speaking from the comfort of her newly constructed house, Malita recalls the inconveniences that came with living in a grass thatched house, especially during the rainy season.

“When rains start at night we used to wake up to move flour and other things away from leaks. This was very inconvenient and our lives were sad, but now through ICRISAT’s support I have extra income with which I managed to build a good iron sheet thatched house and electrified it with solar electricity which also helps us a lot,” explains Malita. Enesi Masho 39, a member of Tikondane Women’s Club in Balaka district, southern Malawi is a budding livestock farmer. She started producing 0.6 tons of CG 7 seed on her 0.5 hectares.  Within a year she increased her area to 1.5 hectares, producing an average of 1.6 tons of groundnut seed.

Balaka district is arguably one of the most drought prone district in Malawi. Even though many farmers in the district have switched to legumes and dryland cereal production, most of them lack access to improved varieties, technologies and agronomic practices. The early maturing and drought resistant nature of CG7, coupled with the fact that ICRISAT provides the farmers with a ready market, has allowed Enesi and other members of her club to improve their livelihood through groundnut production.

After selling her groundnut seed, which she produces under a contract that Tikondane Women’s Club has with MSIDP, she started rearing chickens for her family consumption as well as goats which she sells from time to time providing her an alternative source of income.

The MSIDP project through ICRISAT has enabled many women to diversify incomes and nutrition.